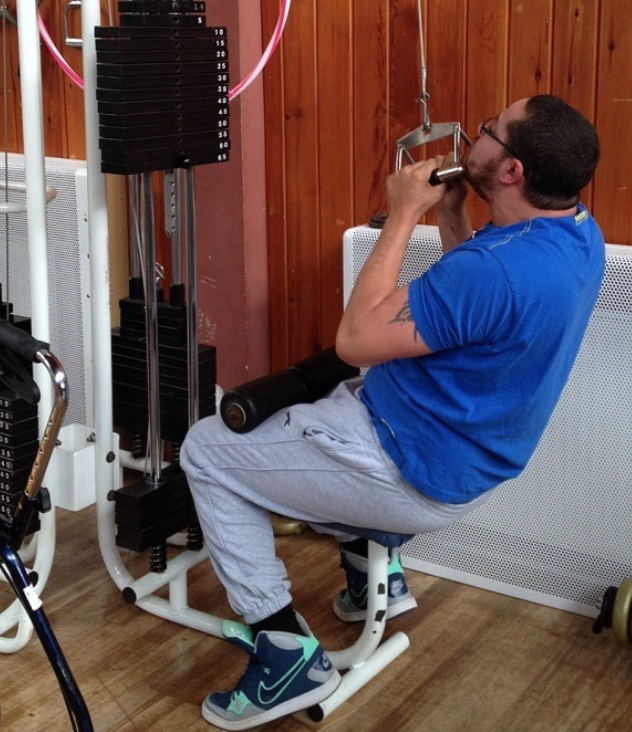 Liam acquired his brain injury in 2012, when he was just twenty six. Two years later, in his late twenties, he’s still living with the effects – mainly on his memory and concentration and his ability to process information. Liam also experiences the fatigue that is very common following brain injury. He says, “I find I get very tired most days and walking and going up and down stairs was very difficult at the beginning.” The physical effects of Liam’s brain injury mean that he has to walk with a frame. Liam’s partner, Kristina, says that his short term and long term memory were very bad:  “I find this sad as Liam can’t remember things from the past.” This is a common difficulty after brain injury, and can be very difficult for family members to come to terms with.

Liam started at Headway in July 2013, attending one day a week to access a range of sessions to help him to cope with the effects of his injury. Liam was a regular weight trainer before his injury; he had a good build and was strong, able to lift heavy weights “no problem!” One of his sessions is in our gym with our specialist instructor. Initially Liam was annoyed that he couldn’t lift the heavy weights like he could before his brain injury.

Kristina remembers that “Liam was really small when he first came out of hospital. He used to have little falls.” His weekly gym sessions mean that he is now much stronger, and he “hasn’t had a fall in ages.” This helps Liam, and it also helps Kristina: “I don’t have to worry so much now, I don’t have to watch him.”

Kristina feels that since Liam has been using the gym and is getting physically stronger, his confidence has grown as well. He can now get up and down the stairs much better, faster and more safely, which means he is more independent. With two young children at home, this is an important milestone. Kristina says, “He can go upstairs on his own, he doesn’t feel like I’m mothering him and watching him all the time.” Liam says his goal is to get back to the size and strength he used to be and improve his ability to get around every day. He likes the gym and values the benefits so much that he’s now coming another day a week. Liam is happy using the gym at Headway as he can’t go to just any gym. “Headway is perfect for him as they understand his needs and help him with his programme,” Kristina says. The specialist gym instructor says, “Liam is a pleasure to work with – he’s so positive. Right from the beginning, his attitude has been one of ‘Bring it on!’ I have to hold him back – slow him down from moving on to heavier weights too soon – to make sure that he doesn’t pick up an injury.” He adds, “Eventually I’d like to see Liam walking without a frame. It will be a long slow process, with lots of hard work – but Liam is determined, and we’ll just keep chipping away one step at a time.”
Liam benefits from a wider programme of support at Headway and Kristina is also pleased his short term memory has improved over time. “He remembers a lot more things; before Headway he wouldn’t remember anything short term. Now he remembers that he has taken his tablets; before he wouldn’t have remembered if he had taken them or not. He is remembering the stuff that the kids have done and can pass that on. He is also more confident especially speaking around people that he doesn’t know.”

Liam also benefits from our Independence Support, with one to one support from a support worker to complete his home fitness programme once a week. Again this keeps him on track so that he doesn’t overstretch himself by progressing to heavier weights too early.

Liam is on a long road to improve the effects of his brain injury – but he can already celebrate the improvements he is making, all based on the foundation of work in our gym.

“He is more confident especially speaking around people that he doesn’t know – before he was much more quiet.”

“His walking is a lot better – he’s a lot stronger than he was, he was really small when he first came back from hospital. He hasn’t had a fall in ages. He used to have little falls. I don’t have to worry so much, I don’t have to watch him. He can go upstairs on his own, he doesn’t feel like I’m mothering him, watching him all the time.”